Honeysuckle is a Champion 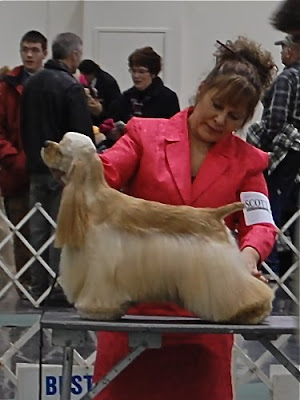 So I traveled 9 hours with my brother and his girlfriend, Diana in a snowstorm to see Honeysuckle show- not knowing if she would come home with me. She only needed 1 point to finish and there actually turned out to be a magor- so there was alot of compitition. On Sunday- she took it home. She looked so beautiful and gaited around the ring with elegance. SHe was not a puppy anymore- she was so grown up. Kathy Korab did such a wonderful job presenting her. Her husband, Jimmy did an even better job of spoiling her. She went to Kathy's as a puppy and she grew up in Jimmy's arms- sleeping in bed with him each night. She loved to cuddle and he loved her very much and it shows. Well- she came home on Sunday- and I have to say she might just be one of the most loving dogs I have ever met. She ran into my 6 year old's arms like she knew her forever. She is truly a merry soul. Thank you Kathy and Jimmy for taking such wonderful care of her; it could not show more.
Posted by Moondrop Gardens Cocker Spaniels at 4:22 AM No comments: 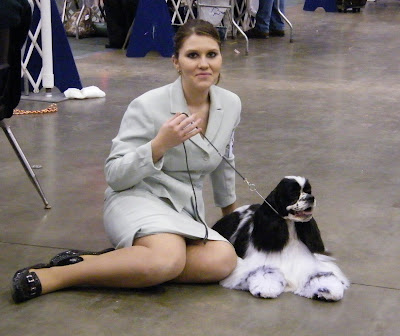 I just wanted to take this opportunity to Congratulate Haley Hesskew, Kathy Korab's (our handler) daughter. Not only did she did she finish as the #1 Junior Handler for our breed (in all 3 vareties) to get her a special invitation to Westminster in February 2011; but she also won best Junior Handler at American Spaniel Club in January 2011. An article about Haley was featured in SHOWSIGHT Magazine in the January Issue. She handles Vinny's father, "Vince", Ch. Tell-Tail's Proof Positive. Congratulations Haley!
Posted by Moondrop Gardens Cocker Spaniels at 9:43 AM No comments: 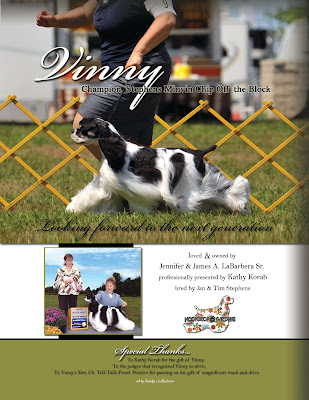 We were very honored that Vinny was chosen to be included in the January 2010 issue of Showsight magazine. I only had a day to design the ad and was relieved when I sent it in on time. Vinny was chosen because he ranked in the top 10 Parti Cocker Spaniels for most of 2010. We are very proud of his accomplishments and are looking forward to seeing his nice qualities in his puppies.
Posted by Moondrop Gardens Cocker Spaniels at 4:21 AM No comments: