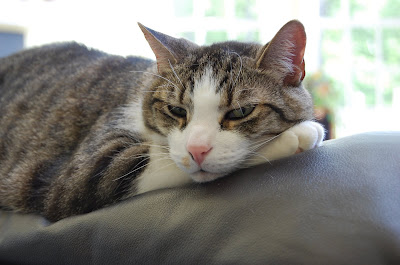 Yesterday was a hard day for us. We had to put my 10 year old cat Daniel to sleep. They think cancer. Daniel was my first pet that I ever had of my own. He loved me like no other and he was my first baby. He took me through alot of hard times in my life and gave me a reason to get up in the morning on some of those days i did not want to (before of course my human child came along). He acted like a dog bc he knew how much I always wanted one. He was devoted, gentle and connected to me in every way. When we moved and after I was home with Rose and got the dogs- Daniel had to share me with them- but had solace in the fact that when it came down to it he was the only one who could fit in my lap and took advantage of it every time he could get. Daniel seemed to not be himself for a few weeks and last Thursday I took him to the vet- they did blood work and everything checked in OK- but he seemed to be sensitive to his kidney area to be touched. I made an appointment to have an ultrasound for Monday. Daniel's health drastically declined and Sunday night I took him in to the Emergency clinic. They did X-rays and said that he had alot of air in his belly and intestines and that most likley they were thinking cancer. It was the hardest thing for me to do- but the way he looked at me I felt that he was telling me it was OK- he was ready. I was there for him and it was hard to let go- but I wanted to share the most amazing part of my story. 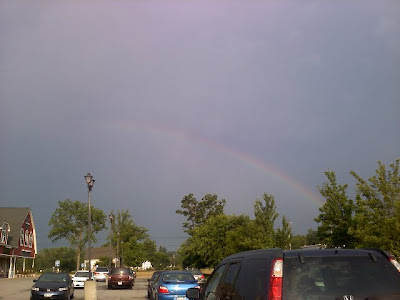 When I left the vets the RAIN poured down on me and I felt like all those drops were my tears and there were so many of them and it was how I felt. But after I got out of the car again- and looked in the sky there was a Rainbow. I took a picture of it bc no one would have believed me if I told them. Jim was in awe. The rainbow to me signified not only Daniels PRIDE- but Rainbow Bridge where he will be meeting me one day. I thanked God for giving me that sign- it gave me closure and is helping me cope. I am still in the very early part of my grieving- but I have HOPE and know that Daniel is where he of course was meant to go and he will be meeting me there..
Posted by Moondrop Gardens Cocker Spaniels at 1:35 PM